When it all adds up 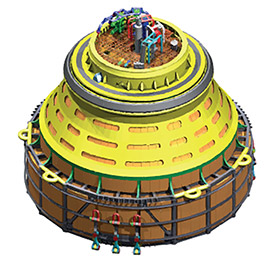 Look at it long enough and you could be forgiven for thinking a person in an old diving suit would emerge from the contraption, head encased in copper plate, the criss-cross of metal bars concealing their eyes from the rest of the ocean.

Yellow and conical, with a complex series of interlocking pipes on its summit, the internal tension buoy was intended by Shell to physically support the Turritella, its first floating production, storage and offloading (FPSO) facility in the Gulf of Mexico.

To prevent it becoming a hazard for passing ships, the buoy was designed to be a part of the FPSO, sitting underneath the vessel so the latter could rotate around it on the ocean swell, like a wheel spinning on an axle.

Proving this concept could work, however, would require a safety demonstration using a scale model, something that usually took months for technicians at Shell to assemble. Fortunately, engineers at the operator knew just how to expedite the process. Using additive manufacturing (AM) techniques, they succeeded in producing – in just four weeks – up to 1,000 interlocking blocks of the syntactic foam that would act as the flotation material inside the buoy.

Shell isn’t alone in realising the potential of 3D printing in transforming its supply chains and other aspects of its operations. GE Oil and Gas has installed printed burners in its gas turbine combustion chambers at a plant in Talomona, Italy, having found that using 3D printers cut the time it took to develop and validate new components in half.

Elsewhere, sizeable operators like Halliburton, ExxonMobil and Repsol have heavily invested in the technology. Indeed, its impact is only set to grow in the coming years. According to a 2019 study by SmarTech Publishing, the market for AM services and facilities in the oil and gas industry will reach $1.4 billion by 2025.

The implications that mass adoption of 3D printing by operators might have on the offshore oil and gas sector are fully appreciated by Ron van Wolferen, an additive manufacturing manager in digitalisation at the Shell Technology Centre in Amsterdam. “We understand what 3D printing means for our business, and that makes us quite a good partner for our suppliers,” he says.

Indeed, AM is one of several emergent technologies – including AI, advanced robotics and blockchain – that Shell has identified as having the potential to radically transform the way it operates.

“And what we see is that none of these technologies are actually isolated,” explains Van Wolferen. One example of how disparate emergent technologies might intersect in the future could be when Shell’s machine-learning algorithms predict the approaching end of a given part’s shelf life. When its use-by date is finally reached, the operator can “order the 3D-printable part”, says Van Wolferen, and “have it on-time delivered, so you can actually keep your business up and running”.

The operator purchased its first 3D metal printer as far back as 2011, with the intention of supporting its R&D arm. “If you look at additive manufacturing, to some extent, we are scratching the surface as an industry,” says Van Wolferen.

Shell envisions three use cases for its 3D printers, beginning with novel design. AM can help its researchers quickly produce new and improved versions of existing components, or experiment with efficiencies in certain parts that eliminate the need for others. “That can really help us in improving the current way we do business,” says Van Wolferen.

The next use case is design visualisation, demonstrated in the case of the Turritella’s undersea buoy. A scale model of a component, or even a smallscale efficiency can work wonders in sparking the imagination of Shell’s many engineers. “They can actually play around with it,” he explains, “show it to colleagues or other experts in that space, and come to the conclusion, ‘Well, the design is okay, first time right’, or, ‘Hmm, I’d rather do things differently. If I could turn this around, or I could do that differently, then I’m there and then I can really scale it up.’”

“If you look at additive manufacturing as such… we are scratching the surface as an industry.”

The third use Shell envisions for 3D printing across its operations lies in the manufacture of spare parts. By embracing AM, the operator and its suppliers can produce new components physically closer to the point of need, and in a fraction of the time. “We are actually now looking into a solution for our obsolete parts,” says Van Wolferen, referring to components that are either not made anymore, or that originate from suppliers that have since disappeared from the marketplace.

Wider adoption of AM across Shell will also help it eliminate a great deal of its spare parts storage over time. “It’s not always needed to have all that stock if you can actually print on demand,” says van Wolferen.

While Shell has ploughed forward with research into AM, other operators have been slower to embrace the innovative technology. Unlike the aerospace and medical devices industries, where 3D printing has helped transform supply chains, the technique’s uptake among energy companies has been fitful. There are several reasons for this, explains Stephen Fitzpatrick, team lead for machining and additive manufacturing at the Advanced Forming Research Centre in the University of Strathclyde.

The first, explains Fitzpatrick, is that decades of high profits served to dull the sector’s enthusiasm for innovations that could expedite its supply chains. Simply put, it hardly mattered that certain components were difficult to manufacture or supply; operators had the financial wherewithal to over-order parts, and ship them wherever and whenever it liked. More straightened circumstances in the past few years, combined with a new-found enthusiasm for diminishing carbon footprints, has compelled these companies to look to new technologies to shorten supply chains and development cycles for new or spare parts. Even so, according to Fitzpatrick, “changing that mindset now can be a challenge”.

Another stumbling block has been the lack of industry confidence in the integrity of 3D-printed parts. Until recently, AM was not defined or protected by the same certification framework as parts designed and built using more conventional methods. As such, many operators were reluctant to invest in a technology that was, by and large, unproven in the eyes of industry regulators, let alone consider 3D printing instruments designed to cope with some of the more dangerous applications in the sector.

Value of projected growth, by 2025, for AM services and facilities within the global oil and gas industry.

In recent years, however, regulators have begun to endorse AM as an important facet of the supply chain within the oil and gas sector. DNV GL has proved notably enthusiastic, establishing an R&D centre in Singapore to experiment with new 3D printing technology, and extending its own expertise in this area to operators and service providers alike. Both Fitzpatrick and Van Wolferen have been working with the certification society to formulate a new qualification regime for additive manufactured parts, which was published in January.

The new guidelines pave the way for the creation of 3D printed parts capable of handling some of the more hazardous applications in offshore oil and gas extraction. “That was for two particular techniques: the wire-arc manufacturing process, and powderbed fusion,” Fitzpatrick recalls. “And that had a lot of operators – tier-one’s – in it.”

For Van Wolferen, Shell’s commitment to this emerging regulatory framework for 3D-printed parts serves to reaffirm the operator’s enduring commitment to safe operations. “All parts we are to produce in the oil and gas sector will actually follow the guidelines,” he explains. “That ensures, for us, that the part that’s 3D-printed has the right quality and material properties.”

Both the American Petroleum Institute and Lloyds Register (LR) have also begun to establish themselves as supporters of the adoption of 3D printing across the offshore sector, providing much-needed certification services for both operators and service providers.

“That’s the basis for our next steps in our industry,” says Van Wolferen, citing LR’s recent certification of the Shell Technology Centre in Amsterdam as an AM hotspot. Having won that certificate, the complex has now begun looking at how AM can make a positive contribution towards areas such as reverse engineering and the further rationalisation of its supply chain. Ultimately, Van Wolferen adds, Shell’s goal is to help professionalise 3D printing throughout its network of suppliers.

“At the end of the day, the ecosystem should print for us and for our peers, of course,” says Van Wolferen. “And as close as possible to the operating assets.”