Power to the hybrids 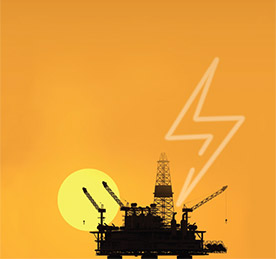 In 2014, Arne Hopland certified the world’s first battery-powered car ferry. It had only taken 175 years. Then again, the electric boat that Moritz von Jacobi launched in 1839 was probably a bit small, even if one of the 14 people on board was Tsar Nicholas I.

Oddly enough, electric boats were in popular use well before cars; the so-called golden age of battery-powered boating was also the smoggy apex of the steam age. The internal combustion engine eventually put an end to both of those eras, but ironically, it’s the reason there are enough cars looking to cross Norway’s Sognefjord to necessitate a ferry service at all.

As the success of the MV Ampere attests, lithiumion batteries have precipitated the return of electric. Their lead acid predecessors had very low energy-toweight and energy-to-volume ratios, which made them unsuitable for most marine applications. Furthermore, as Hopland explains, rigs and ferries that make use of battery power for some or all of their operation need more flexibility than earlier technologies could provide.

The MV Ampere works by topping up its batteries during the nine-minute stops on either side of the fjord, only completing full-charge cycles overnight. That’s not a model that would work for drilling rigs, but hybrid power systems offer huge amounts of versatility for operators looking to make efficiency savings when extracting resources from the sea bed. Indeed, the next ferry Hopland classified for DNV GL modified the same energy storage technology to account for the fact that it had no access to charging stations on shore.

“[The operators] needed to run two generators to cross, and then one generator while cars were embarking and disembarking; they needed to stop and start generators all the time,” he explains. “But they sized the batteries so that they could run with one generator at all times at 80% load, which was the best for the generator. And the batteries would discharge to support it while crossing, and charge from it while laying quayside.”

The second generator was not removed, but remains as a redundancy that can also provide extra power if bad weather makes it difficult to complete the crossing. He compares the solution to a Toyota Prius hybrid, drastically cutting fuel costs without any compromises on safety.

Five years after the MV Ampere led the way for ferries, Northern Drilling’s West Mira, an ultradeepwater semi-submersible now operating in the North Sea’s Nova field, became the first oil rig to be awarded the DNV GL Battery (Power) class notation. It operates a hybrid power plant using lithium-ion batteries as both the spinning reserve for its dynamic positioning system, and a source of extra power during peak load times.

Couldn’t give a rig

Much of DNV GL’s work on adapting its battery power notation for rigs and their service vessels has focused on dynamic positioning systems, which are set up to ensure that no single failure will cause one to lose its position and crash into the other. Traditionally, that has required each vessel or platform to keep a second generator running, in case the primary one trips or breaks down. This decreases efficiency to the extent that Hopland believes it’s the area where operators can achieve their biggest fuel savings.

“Even if you have a generator that’s 4MW, and the total load – because it’s a beautiful day – is just 1MW, you still need to have two generators online to meet the dynamic positioning requirements,” he says. “If one of the generators trips, then it’s other running machinery is supposed to provide the redundancy.”

In practice, that means that in the course of most operations, there are typically two generators running at loads as low as 8–10% of their capacity.

“However,” continues Hopland, “if you replace one generator on one side of the main switchboard with a battery pack of sufficient size, it can sit there fully charged [and] doing nothing, but still act as the spinning reserve. It doesn’t need to start or anything; it’s already started, it’s running, it’s there.

“You can replace a running generator with a battery pack and save a lot of running hours, while allowing the other generator to run more efficiently at a better load.”

The reductions in cost and emissions that can be achieved through this system are striking. West Mira’s operator Seadrill estimates that the rig’s four converterbattery systems reduce the runtime of the on-platform diesel engines by 42%, cutting CO2 and NOx emissions by 15% and 12% respectively.

That’s not the only example of how a well-thought out battery installation can be used to optimise a rig’s performance. Hopland is almost continually surprised by the range of applications he encounters for hybrid power. Most straightforwardly, rig operators can use batteries as power reserves for maximising uptime, but one of Hopland’s favourite uses sees them manage the load fluctuations caused by the use of cranes on cargo vessels. Like rig drilling drives, cranes rapidly switch between idling and requiring huge amounts of power.

“How many generators do you need to keep running if you have one lift every 10 or 15 minutes?” Hopland asks. “Well, you need to have enough to handle the maximum load. But if you have sized some batteries correctly, they can actually deliver this huge load for the short time it’s needed, and fewer generators can be used to charge up the batteries in the meantime.” On top of that, unlike generators, batteries can take back energy produced by the cranes through regenerative braking. Impressively, a joint project by DNV GL and Grieg Star showed that a cargo vessel using this approach could achieve energy savings of 30%, and a payback time of under a year.

According to Hopland, a similar system is currently being trialled on an unnamed drilling vessel. “They are using a flywheel and batteries in combination to harvest return power from the drill-works, and thereby reduce the peak loads,” he says. “The power grid and the generators don’t see this power demand because the excess power is mostly being taken from the flywheel and the batteries.”

Perhaps most impressively, a recently retrofitted hybrid, Transocean’s Spitsbergen, actually combines these solutions. It captures energy wasted in normal rig operations, and stores it in batteries that are used to power the thrusters for dynamic positioning.

The percentage by which West Mira’s four converter-battery systems are estimated to reduce the runtime of the on-platform diesel engines.

For every application, however, there are numerous safety considerations. They are DNV GL’s true focus. “Let’s say there was a vessel that wanted to have a huge battery pack to make sure that the 150 coffeemakers on board were always working,” supposes Hopland. “Well, we don’t care so much about the coffee-makers, but we do care about the safety of the batteries.”

That said, coffee would probably help anyone trying to think through all the complexities of solving those battery dilemmas. “Some battery types need a fixed-fire extinguisher system to stop possible thermal propagation, and some batteries don’t,” Hopland explains. “Some can emit a huge amount of flammable gases, and some don’t. It all depends on how the batteries are built and positioned, as well as the energy density.”

Those are the topics Hopland most commonly finds himself explaining to operators at DNV GL’s workshops on the use of hybrid power for drilling rigs. “What’s doable is decided mostly in terms of safety,” he explains. Or, less elegantly, an investment can only pay off if you’re allowed to utilise it.

With specific initiatives, like Norway’s NOx fund and Enova agency, reimbursing and rewarding companies for cutting emissions and achieving greater levels of energy efficiency, it’s important not to lose sight of how those goals can be achieved. “We can give added value at an early stage by making sure that operators make the right choices before they buy something they maybe, in the worst case, can’t use at all,” concludes Hopland.