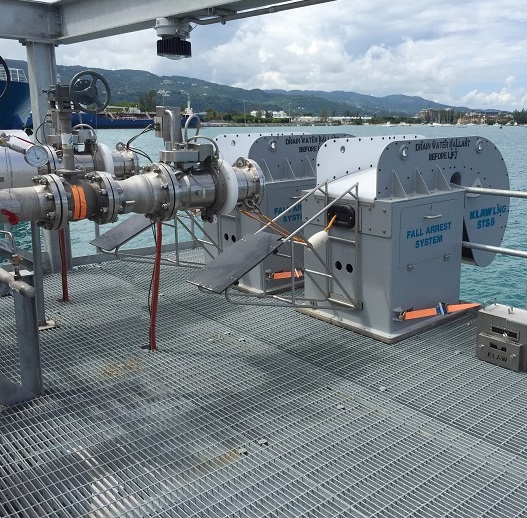 Signum Technology Group company KLAW LNG, the world-leading specialist in the design and engineering of ship-to-ship and ship-to-shore liquefied natural gas (LNG) transfer systems, has transformed the lives of the people of Montego Bay, Jamaica by delivering the world’s first fully automated LNG safety transfer system to enable a reliable flow of LNG to this community.

Working in partnership with Exida and Siemens for client Fortress Energy, KLAW LNG has designed, engineered and manufactured this ground-breaking Safety Integrity Level and Safety Instrumented System (SILSIS). This has transformed the lives of the island’s residents by giving them, for the first time, a safe and reliable flow of LNG, which is then used by the island’s power generation facility to cost-effectively generate power for homes and businesses, as well as to run road transport.

The question of safety was the main driver behind the next generation technology employed by KLAW LNG in the design of this system. “LNG has to be kept at very low temperatures in order to be transferred. When heated it will expand instantly by 700 per cent, so it is especially vital to engineer ground-breaking safety systems when dealing with delivery to an urban community,” explains Julian Fairman, KLAW LNGs technical manager of control systems. “At a very early stage in the project we took the view that it was necessary to innovate and drive the technology forward so that we could provide a solution that was far in advance of the accepted standards.” What this has led to is the creation of what is unquestionably the world’s most advanced LNG transfer system, in terms of both safety and availability. “We are very proud that SILSIS is the world’s first fully-automated, Programme Logic Controlled (PLC), Safety Instrumented System, designed to continuously guarantee the highest levels of safety and operational readiness,” Fairman says. “It is also the world’s first SIL2 compliant safety delivery system, which is highly significant. “More importantly though, this means that the people of Montego Bay have had their lives transformed because the power station, which previously ran on diesel, was extremely expensive and damaging to the environment. It is no exaggeration to say that the cost of this power was crippling to the island’s economy and up until now they had no practical alternative. SILSIS means they now have a reliable and cost-effective energy source that is delivered with the highest safety levels of any LNG transfer system on the planet.”

The two-stage ESD emergency shutdown system designed into SILSIS provides an escalated response in the event of something going wrong. The first stage ESD1 isolates lines, sounds a warning alarm, and inhibits transfer to reduce any risk of spillage. The second stage ESD2, which is activated automatically or manually, activates emergency release couplings and separates the transfer system.

The fact that the system has become the first to achieve SIL2 safety compliance is a major testament to the excellent engineering standards behind it. The fact that SILSIS is a fully-automated PLC system also means that it removes almost all human inputs from the transfer process. This maximises cost efficient availability and vastly reduces the potential for human error.