Enhanced oil recovery has been a much-hyped resource in the oil and gas industry, promising to squeeze more oil from the ground and power the industry into a more sustainable future. New technologies can refi ne this process even further, boosting the efficiency of existing operations and, in the long-term, slowing down demand for new reserves. Gary King talks to Zachary Paul Alcorn, a senior reservoir engineer and geoscientist at the University of Bergen, about the latest versions of this method and what they mean for the future of offshore oil in a Covid-stricken world.

The Clair Ridge project spends most of its time hidden from view. Consisting of two bridge-linked steel structures rising out of the freezing waters 47 miles west of the Shetland Islands, Scotland, a decent pair of binoculars is required to glimpse its outline on a clear day from land, let alone in the grey swathes of North Sea mist that so often hide it from view. Despite its largely inconspicuous existence, however, Clair Ridge is a remote place teeming with quietly revolutionary activity.

Thought to contain up to seven billion barrels of oil and gas, British Petroleum (BP) has plied the Clair Ridge field since 1977. Finding a way to pump those hydrocarbons out from under the sea floor, however, has been anything but easy. It took until 2018 for any oil to come gurgling out of Clair Ridge, an occurrence less remarkable for how many barrels BP could now pump out of the field – some 640 million, according to the latest estimates – than the method that led to the rejuvenation of this forgotten extraction site.

Clair Ridge is one of the first examples of enhanced oil recovery (EOR) methods successfully being employed offshore. Also known as tertiary production, EOR is the technique whereby operators can retrieve the oil it cannot recover from a field using traditional pump jacks or water and gas injection methods. According to estimates by the US Department of Energy, these first two techniques combined typically result in the extraction of just 20–40% of the oil that’s in a given reservoir. EOR, meanwhile – which uses gas, heat or chemicals to change the very make-up of the reservoir – can allow for up to 60% of the oil inside to be recovered.

Until recently, these figures have mostly pertained to land-based reservoirs, where operators have been perfecting tertiary production since the 1970s.

As one of the first offshore examples of the technique, the work being done by BP at Clair Ridge is an important indicator for the industry at large of the vast potential that still resides in subsea reserves. Indeed, EOR could play an important role in the final act of the offshore oil market, as the global energy market transitions to renewable forms of energy. To remain competitive, operators may need to turn away from expensive exploration expeditions and towards proven reserves for extraction, and EOR could prove essential in squeezing out the final drops of black gold from these known fields.

Clair Ridge is the first BP project to utilise the company’s Lo Sal water-flooding technology, an EOR method that causes low-salinity water to target and mix with clay inside the reservoir, before releasing any oil buried beneath the surface. The company is also using their own ‘Bright Water’ concept alongside this method to inject tiny micron particles into the water that flows deep into the reservoir, expanding at optimum temperatures to block poorly swept areas and improve oil recovery further.

The site marks an important stepping stone in BP’s 40-year mission to refine EOR for the offshore market, a technology that the company sees as an integral part of future onshore and offshore developments. The UK-based operator is hardly alone in this department. With around 70% of the oil fields around the world having reached or about to reach maturity, EOR is touted as a silver bullet solution to the paucity of easily recoverable reserves.

Tertiary production techniques generally fall into three categories: thermal, chemical or gas injection methods, the last of which proving the most popular. The most widely used method out of the three uses gas, and involves highly pressurised quantities of CO2 being pumped into existing oil reservoirs, loosening the rock and displacing the remaining hydrocarbons from tightly wedded geological pores.

Currently most oil and gas companies taking advantage of this method are doing so on land, utilising new technologies to crank up the pressure in the nooks and crannies inside deposits to unearth these previously unobtainable assets.

Zachary Paul Alcorn, a senior reservoir engineer and geoscientist at the University of Bergen, spends a great deal of time analysing EOR processes, measuring CO2 displacement mechanisms to assess how much of the gas is required to remove the equivalent amount of oil, while running simulations to predict how successful EOR techniques might be in the field.

One of these pilot projects, a foam-based form of EOR used for CO2 extraction, is being trialled in the Permian Basin, the vast swathe of dusty rock land that stretches thousands of miles between New Mexico and west Texas. Since the 1970s, the region has become a sprawling factory for oil-rich carbon conversion, accounting for around 5% of global production.

It has also become a test bed for another, more unlikely facet of EOR – carbon storage. After all, the CO2 being pumped into the ground not only revitalises ageing oil fields, but the atmosphere, too.

“Enhanced oil recovery, in particular, is advantageous because you get the added benefits that you can inject CO2 to displace the oil and then subsequently store CO2 within the reservoir,” explains Alcorn.

“Enhanced oil recovery, in particular, is advantageous because you get the added benefits that you can inject CO2 to displace the oil and then subsequently store CO2 within the reservoir.”

This has been straightforward on land. Offshore EOR projects, however, are still relatively rare. A study by the science journal Energies, in 2016, reported that only 19 “successful” offshore developments were in operation, maintaining that the high-cost of installing and implementing the technology remained a significant barrier to adoption.

In some countries, EOR is actually shifting the focus inland. In Angola, for instance, developing new fields can mean delving into unexplored areas of deep water, an unenviable task that has brought certain companies back to mature oilfields.

Nevertheless, experimentation in offshore development has been growing since the mid-2000s, as Russia and oil-rich nations in the Middle East consolidate their global market dominance. Norway and the UK have also been experimenting with EOR and carbon-capture solutions, seeking to maintain traditionally high-production targets, while reducing greenhouse gas emissions.

This activity has coincided with a turn toward recapturing anthropogenic sources of gas. While in the Permian Basin, natural CO2 taken from below the earths’ core is transported by miles of pipelines stretching across the prairie, oil and gas companies across the globe are experimenting with alternative methods that utilise quantities of carbon captured from power plants and cement factories. These human-made sources could, in theory, be utilised to help offshore projects maximise hydrocarbon recovery and drive them further towards a lower carbon emissions future.

Successful offshore developments in operation in 2016.

Invariably, repurposing a traditional pollutant and utilising it to obtain cherished resources is a win-win. Not only can CO2 be converted, rather than being released into the atmosphere, but it can also be deployed to winning effect – or so the argument goes. As Alcorn is quick to point out, however, implementing CO2 injection methods in offshore environments remains a challenge. “One main problem in any gas injection EOR, which is probably one of the strongest methods you’ll see applied in offshore reservoirs, is that the mobility of that gas is going to be extremely high compared with the fluids in the reservoir – meaning it’s going to be hard to control where that fluid is going,” Alcorn explains.

Due to its ultra-low viscosity, the CO2 can end up bypassing most of the reservoir entirely, channelling into other zones that have higher permeability. Put more simply: these unruly quantities of carbon can miss their desired target.

To counteract this problem, Alcorn and his team of students at Bergen are busily working to develop a foam that can be injected with CO2, trapping the bubbles within the formulation, increasing its viscosity and subduing any unwanted movement streams.

“A lot of the earlier phone projects were concerned with generating very strong foams around the well to reduce CO2 mobility there. However, the project we’re doing now is what we call in-depth mobility control,” says Alcorn. “We want to reduce that mobility further off into the reservoir, where it’s going to have a better chance of contacting areas that have not been swept by injected fluids beforehand.”

The lab is now looking to conduct trials in the Permian Basin to better understand the foam displacement mechanisms and bridge the gap between experiments conducted in the laboratory and how these methods fare out in the field. Ultimately, Alcorn sees EOR as a pragmatic attempt to reduce carbon dioxide emissions while serving the ever-growing demand for oil and gas. According to the International Energy Agency, fossil fuels provided 81% of global energy in 2017. By 2040, that figure could still be as high as 74%.

If ambitious net-zero targets are to be achieved and the global demand for oil satiated, many companies will have to find cleaner ways of working. EOR, Alcorn argues, is as good a solution to a problem as any.

“It’s not practical to stop producing fossil fuels. They’re still going to continue to supply a majority of our energy in our lifetime and beyond that,” Alcorn says. “If you’re going to mitigate greenhouse gases, one of the most straightforward ways to do that is to capture them and inject them into subsurface reservoirs. In fact, that’s the only method that you can store gigatonne levels of CO2.”

With the financial wounds inflicted by Covid-19 still yet to heal, efforts to implement new EOR methods will most likely be put on the back-burner for the time being as those in the industry turn away from further investment and consolidate their finances. Despite the short-term disruption caused by the virus, Alcorn is positive about the future of tertiary production, predicting steady bursts of ongoing activity in the next ten years, particularly in the North Sea. Brazil and Mexico, he says, are also showing great promise.

“As far as any detrimental long-standing effects, I don’t think it’ll have a major impact moving forward because people are keen to develop [EOR techniques],” Alcorn concludes. “And they know that they’re going to be required to not only maintain production, but to make production a little bit cleaner.”

As offshore EOR sites grow in numbers and facilities, onshore continues to experiment with anthropogenic CO2 sources. A marriage between the two could have a transformative effect on the offshore oil and gas sector, turning traditional offshore environments into carbon-capture plants and powering the industry into an eco-friendlier future. In a world excited by expansion, it could be that staying closer to home was the answer all along.

The Permian Basin, where one of the pilot projects for foam-based EOR is being trialled. 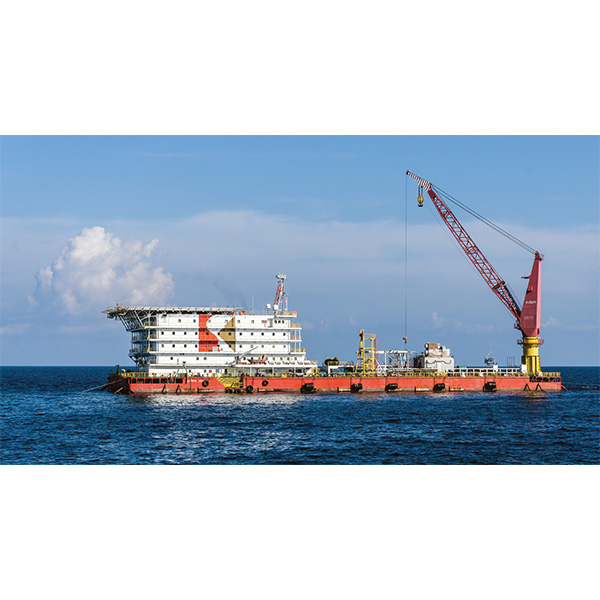 An accommodation work barge anchored at ExxonMobil’s Tapis field, supporting a brownfield project for the Tapis EOR programme.
Post to: