The exterior inspection of offshore rigs – often involving dangerous work at dizzying heights – poses significant health and safety risks. In the age of drones, not only can much of the risk to life and limb be eliminated, but also the accuracy of the inspection process can be improved. Jim Banks talks to Danny McMahon, metrology and digital manufacturing team lead at the University of Strathclyde’s Advanced Forming Research Centre, about the future’s new flight path.

Drones are no longer a flight of fancy. Rather, they are fast becoming part and parcel of everyday life. Most will have seen news footage shot with drones, watched one being flown by children in the park or even heard of their potential use in the delivery of online purchases. Otherwise known as unmanned aerial vehicles (UAVs), these are becoming commonplace in many industries. And the energy sector is no exception.

In the oil and gas industry, there has been intense interest in the use of drone technology for operational assessments and surveys, especially for structures that make inspections by humans a challenging and potentially dangerous task.

For large structures in remote locations – where the environment is hazardous – drones potentially represent a great improvement in health and safety, which is why big operators such as Shell and Maersk Drilling have become early adopters of the technology. “The use of drones is not only about safety, but also about accuracy,” explains Danny McMahon, metrology and digital team lead at the University of Strathclyde’s Advanced Forming Research Centre (AFRC), a specialist technology centre at the National Manufacturing Institute Scotland (NMIS). “The oil and gas industry are starting to use UAVs for visual inspection. But there are challenges from some environments, notably the North Sea, where you need a pretty heavy drone and where you have to be aware that conditions can change quickly.”

McMahon’s work at the AFRC has involved the reverse engineering of components using sophisticated 3D models, derived from full-field scanning methods. Scaling up to larger structures, this technique feeds into asset-modelling and inspection in a range of industries.

“There is a lot of interest in the technology for inspection and there are even some concept designs of welding drones that can operate in confined spaces,” says McMahon. Even so, he adds, “we are a long way off drones being used to perform that kind of task”.

“There is a lot of interest in the technology for inspection and there are even some concept designs of welding drones that can operate in confined spaces.”

While health and safety may be one of the main drivers of drone use for inspection, the technology also promises many more benefits. In an industry with highly complex assets operating in many different environments across the globe, using UAVs present an opportunity to perform more detailed and reliable inspection at a much lower cost.

A drone, which can be piloted remotely, can perform the same visual inspection that might normally require a large team of personnel working in the field for an extended period of time. Furthermore, the resolution of the images they provide may well provide more accurate information than a human working in a hazardous environment. This could be especially beneficial in an emergency, where situational awareness is of vital importance.

The past five years have seen a dramatic rise in the use of UAVs for inspection. In 2016, for instance, Condor Solutions flew the Microdrones md4-1000 system in Arctic conditions to inspect the Berkut Oil Rig in the Russian Far East. Given the challenging weather conditions and the scale of the rig, this was a major challenge for the technology. Nevertheless, the UAV was able to deliver important thermal imaging data on the facility’s flare system in a relatively short time, while limiting the risks to personnel.

The following year, Texo Drone completed the first scan of an offshore rig using drone-mounted lidar (light radar) technology. Using its T28 Platform drone – a particularly large example of the form, more reminiscent of the Wright Flyer than a piece of hyper-modern technology – the company conducted a survey of the Paragon HZ1 rig in the North Sea. During a flight lasting barely more than half an hour, the drone collected more than 15GB of data about the structure. Subsequent years have seen many more companies target the offshore energy market with UAVs designed specifically for asset inspection. In 2018, Air Control Entech (ACE) and the Oil & Gas Technology Centre launched three next-generation drones that they believed could help the industry cut offshore oil and gas inspection costs by almost 50%.

The approach adopted by ACE differed from others in that it did not attempt to modify an existing design, but, instead, it worked closely with industry partners to design new UAVs specifically for the needs of the offshore industry. The result of which was a technology that provided a high-definition video stream and data transfer from offshore inspections to onshore teams in real time.

The drones, which use 3D laser-scanning with an accuracy of 2mm, have since been trialled by a number of major operators for deployment in the North Sea. In 2019, leading mobile satellite communications company Inmarsat debuted its own innovation programme to investigate and enhance how commercial UAVs communicate with satellites. With partners Cobham and Starburst, Inmarsat teamed up with seven drone companies to, in its words, “integrate L-band connectivity and carry out trials with highprofile customers from the oil and gas industry”.

“The market for commercial UAVs is set for explosive growth and we expect satellites will play a critical role for UAVs operating in remote areas, where terrestrial networks are limited,” added Jordan Picard, digital incubation lead at Inmarsat.

Beyond the human eye

Over time, the capabilities of UAV technology have rapidly improved, so, collaboration among industry partners throughout the value chain will be essential to keep pace with the potential of drone technology. A key step forward has been the move from remote control operations to autonomous or pre-programmed flight.

“In the past, small commercial UAS [unmanned aerial system] technology can be traced back to remote-controlled hobby aircraft, requiring significant skills to operate,” noted Chris Chung, head of strategic research projects at Lloyd’s Register, back in 2016. “However, rapid advancements in hardware and software, including air stabilisation, pre-flight planning tools, obstacle detection and avoidance technology, have transformed these small aircraft into viable business tools that are likened to high-definition eyes in the sky.”

The next advance is already coming into focus. McMahon’s team at AFRC has been working on photogrammetry, which is the science and technology of obtaining reliable information about physical objects and the environment through the process of recording, measuring and interpreting photographic images.

“We began with a wind turbine, which previously required a human to abseil down to inspect it,” explains the engineer. “That not only raises safety issues, but also the human eye does not have the same resolution as the images we were able to create. Our scan uses a colour map, which clearly indicates any deviation from the models.

“Photogrammetry uses a camera to stitch together a 3D model but there is a challenge of scale – as the images are not 3D,” McMahon continues. “We used a scanning technique on an end-of-life turbine, which we scanned and compared to our model. We were able to define the flight path to improve the resolution of the images and the orientation of the drone. We used autonomous flight because it is more accurate than flying the drone manually. The results were highly accurate, with tolerances of less than 1mm.”

McMahon is now looking at applications in the wind, nuclear and oil industry. The rig his team is using is simple and inexpensive. It uses 12 off-theshelf cameras, which are fixed to a simple aluminium frame. The rig is a quick and cheap way to get a highly accurate 3D model of any component, and its low-cost means SMEs, as well as the large operators, can afford it. “It is a very accessible technology,” he notes. “For now, photogrammetry is not much used or, indeed, widely understood. The industry is just dipping its toe in. Covid-19 could accelerate its adoption as it makes working in confined spaces, or even rigging up a person for visual inspection, much more difficult. It is hard to social distance in those circumstances.”

Data collected by a T28 Platform drone during its inspection of Paragon HZ1 oil rig.

“It may seem counter-intuitive, but offshore rigs might be easier than wind turbines for photogrammetry. Rigs have many distinct features, whereas for a wind turbine, it is difficult to stitch together the images because the elements all look very similar.” With the promise of reducing risk and cost, while providing more detail and higher resolution images, drones may soon be the only sensible option for inspection. 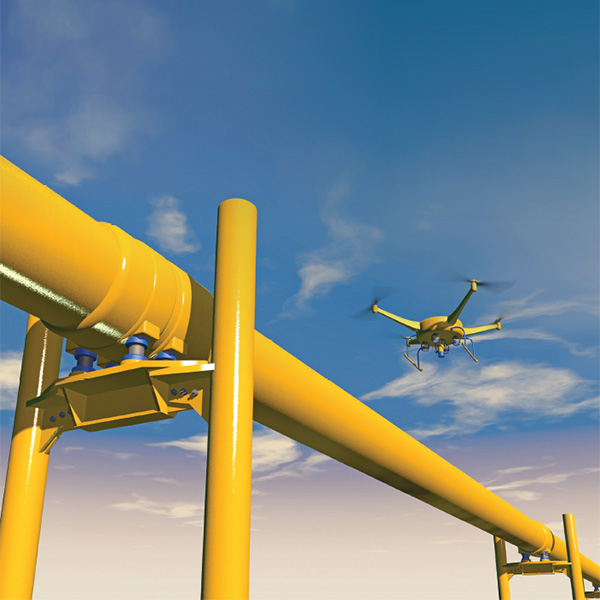 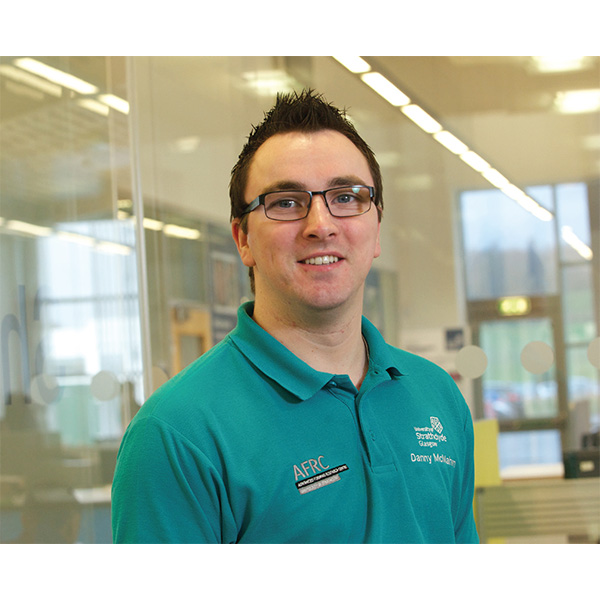 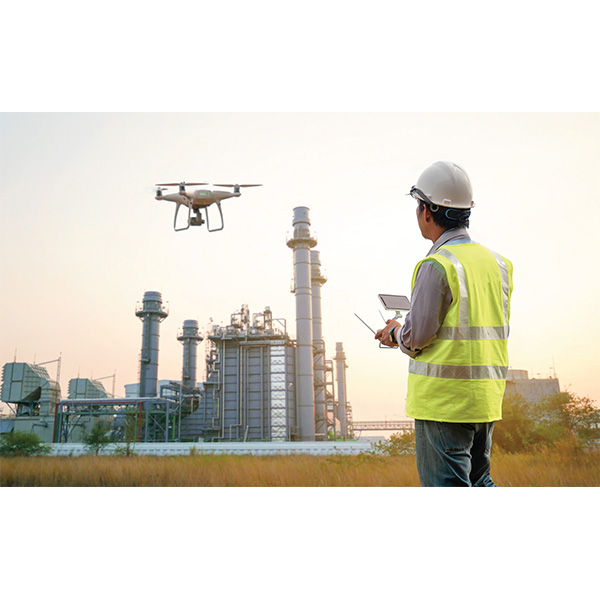 As UAVs become more commonplace, the oil and gas industry are beginning to use them for visual inspections.
Post to: