Success in the deep end

Their scale and significance means that deepwater projects always come with risks attached; they require significant investment of time and finances. Isabel Ellis discusses how creative thinking and the intelligent use of data can result in efficiencies and savings with Marno de Jong, project manager of Shell's Appomattox project, and Kenneth Johnson, Halliburton’s completion manager for Total’s Egina field.

Knowledge, of course, is power; and for power, you need fuel. We dig wells and float thirsty behemoths for the hydrocarbons, but the first thing to rise from the seabed is always data. When the value of the former falls, it’s the latter that has to make up the difference. Without turning data into actionable knowledge, we’re doomed to dig the same well in every field.

“Even if you’re doing something the same way all the time, there should be improvements,” points out Kenneth Johnson, the Halliburton completion manager for Total’s Egina project, which started production in December 2018. Since beginning completion activities, the project has achieved 40% and 60% reductions in upper and lower completion times, respectively, between its first and last wells.

“If there’s no improvement,” he continues, “then what are you doing? You might think you’re performing well because you don’t have any nonproductive time, but the way you bring value is also about continuous improvement and applying any lessons learned and best practices, and passing the learnings on through peer reviews.”

Megaprojects have always had to adapt as the world changes around them. In general, though, oil doesn’t lose two thirds of its value in 18 months. Between September 2014 and January 2016, the price of a barrel plunged from more than $100 to less than $30. 2015, then, wasn’t the most auspicious year for Shell to make its final investment decision on the Appomattox project, the Dutch giant’s largest platform in the entire Gulf of Mexico. Expected costs had already been cut by 20%, but as the downturn worsened, it became clear that it wasn’t going to be enough.

40%
The cost reduction in the Appomattox project after it was approved for construction.
Shell

“The usual project management guides will tell you not to change anything after the final investment decision,” says Marno de Jong, Shell’s project manager for Appomattox, which also achieved first oil last year. He didn’t have that option. “Every individual working on the project was palpably aware of the fact that the industry was going through a downturn, and that there was a very direct line between achieving the necessary cost savings and keeping the project, the company and the industry affordable and competitive.” If anyone hadn’t realised the stakes, 2017 brought news that worldwide more than 440,000 oil and gas workers had lost their jobs since the beginning of the downturn.

To stop themselves going the same way, the team at Appomattox had to leverage every last drop of data and knowledge they had at their disposal. Uncertain prospects, however, don’t always encourage creative thinking. Economic precarity is more associated with defensiveness and apathy than openness and experimentation. As de Jong sees it, this requires operators to instil a sense of ownership throughout the organisation.

Johnson agrees. Though Egina didn’t face quite the same challenges as Appomattox, it was still an ultradeepwater development with a forecast output of 200,000 barrels a day. “With the millions of dollars a day that can be spent on a rig, there’s a lot of eyes on you to perform and improve,” he says. Accordingly, one of Johnson’s main emphases as a project manager is taking ownership of the process by which work is tracked and measured. From there, he shares that responsibility out with the project team through the job log, which everyone has access to and can use as the basis for suggesting improvements.

“There are no secrets,” he explains. “Within two weeks, following the end of the completion, both Total and the completion team know how we performed. Projects always have meetings at a managerial or a coordinator level, but we try to filter everything back down to the people that are actually running the job to get everybody talking about being prepared and what the next step is.

“If they’ve got skin in the game, if they’ve got ownership, they can go from there. But if you don’t measure anything, it’s hard to really discuss it.”

That’s why Shell opened up Appomattox’s financial data to everyone involved in the project, urging every manager, team leader and worker to think just as intently about the cost impacts of their work as its place in the engineering scheme. “They didn’t think the financials for their project delivery lines just sat with the finance manager and the services manager, but that they actually owned them,” de Jong explains. “We’ve run this multi-billion-dollar project more like a multi-billiondollar business.

On top of that, Appomattox made extensive use of what Shell calls a ‘5D’ approach to engineering and fabrication. In effect, ‘5D’ ties 3D models of the final platform together with its projected construction and delivery costs and schedules, as well as its current progress and expenditure, allowing fabrication staff to superimpose and compare them without guesswork or endless chasing. “I’m glad to say we’ve moved on from people walking around the yards with pieces of paper,” adds de Jong. “They’re now walking around with their iPhones and iPads.”

Jokes aside, Appomattox was completed months ahead of schedule. Despite the cost-cutting requirements, after analysing the progress of previous Shell deepwater projects from the final investment decision, the Appomattox team decided that the focus for all critical path elements should be speed, rather than savings. This was because there was more time to rethink, challenge and test the subsea, non-critical path activities without risking delaying the project and spending any contingencies, which would have been disastrous.

Similarly, one of the most impactful cost-saving initiatives relating to the platform’s pipelines actually didn’t change the pipeline at all. Instead, by changing the design of the concrete matting used to stabilise the steel pipes and separate them from any unrelated ones they might intersect, Shell was able to cut the number of concrete mats required from over 2,000 to only a few hundred. Simultaneously, that one design tweak saved around $50 million and drastically reduced the risks associated with installing the export pipeline.

“Every individual working on the project was palpably aware of the fact that the industry was going through a downturn, and that there was a very direct line between achieving the necessary cost savings and keeping the project, the company and the industry affordable and competitive.”
Marno de Jong

“For a long time, the industry had been putting a particular kind of concrete matting on its pipelines,” explains de Jong, “but because we had decided to look for cost savings everywhere and anywhere, and because we had time on our export pipelines, which were well off the critical path, we were able to test and prove the effectiveness of a new design that hadn’t been implemented yet.”

Even at the very end of the project, with so many cost savings already secured, Shell further reduced risk and cost by remotely commissioning the Appomattox platform. Instead of having to deliver an enormous amount of labour offshore, automation and data analysis tools allowed operators to commission all of the equipment from a control room in New Orleans. De Jong likes that example, saying that it shows how making things more efficient and simple often ends up taking exposure risks out of the equation as well.

“At the outset, the capacity of the project was for 175,000 boe a day and it still is: the platform and the infrastructure still does exactly the same as we intended it to do,” he concludes. But by making financial data as much a focus as its technical equivalent, his team introduced approximately 2,500 different cost-saving initiatives during the execution phase of the project. Together, these cut billions of dollars from the original budget: 40% of the total.

Appomattox didn’t have the luxury of replicating what had come before. In other cases, though, inertia can prove hard to surmount. “Change is a challenge in itself,” sighs Johnson. “People are resistant. A lot of time you start working somewhere and people just say, ‘We don’t do it like that’, or, ‘That wasn’t invented here and we know what we’re doing – it’s better our way’.” Johnson has seen that attitude, coupled with a failure to effectively communicate, result in the same operators and service companies instituting different best practices and technical limits in different regions – which sometimes resulted in the same process taking up to four times as long. “But,” he makes clear, “when you start tracking things you can start forcing yourself to transfer procedures across borders, and justify transferring.”

Like Shell, Total and Halliburton set out to challenge convention in pursuit of efficiency. Unusually, each gauge mandrel was assembled and tested at the manufacturing centre, rather than on-site. The splice-sub assemblies were also delivered in their final form and simply attached to the tubing hangers, reducing Total’s best installation time from 12 to eight hours. This was all possible because of Halliburton and Total’s joint commitment to founding best practices on data insights.

That takes a systematic approach. “Each completion has a series of events that you break it up into,” says Johnson. “You could call it a factory method: we’ve got technical limits set for each one of the sub-events. We know how long it should take for either an upper or lower completion, whether it’s a water injector or an oil producer. We know the crew, we know the rig, the event and the sub-event. We tie events down to either time (hours) or rate (hours per thousand feet). Because of all the variables that impact a completion, the hours per thousand feet are more useful.”

It was no different on Appomattox. As de Jong explains, “Whenever we found a scope change that would save us costs in well ‘n’, we would immediately take that to well ‘n+1’ and take what we find in ‘n+1’ to ‘n+2’.”

Not that data is anything by itself. “There has to be openness to drive the success of a project,” adds Johnson. “We want to have continuous improvement and we want to have something that works, and works for every well.” 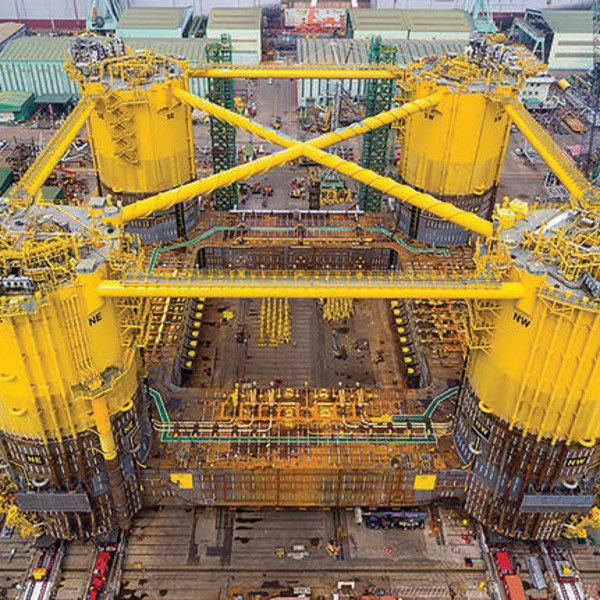 During its construction, Appomattox made extensive use of what Shell described as a ‘5D’ approach to engineering and fabrication. 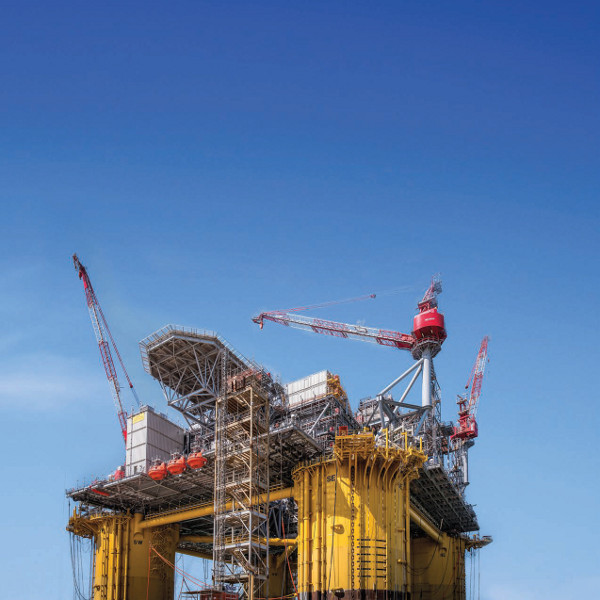 The Appomattox project, Shell’s largest platform in the entire Gulf of Mexico.
Post to: