For years chained to book learning – or else, gruelling on-site exercises – energy companies are increasingly exploiting the huge potential of virtual and augmented reality systems to train their staff. Andrea Valentino talks to Jeff Potts, a cyber physical systems team leader at Baker Hughes, and Kyle Daughtry, an XR solution architect at ExxonMobil, about how these simulation platforms have already transformed training for offshore workers and how more remarkable new technologies could soon replace it.

Moving offshore created new challenges for the oil industry. While wells had been drilled beneath the US coast since the end of the 19th century, they never ventured further than the rickety wooden piers of the day could reach. Knowing the bonanza that awaited them, the oil companies moved their drills out to sea as quickly as technology could carry them: first on barges and, by the late 1940s, on rudimentary platforms.

These were rough and ready days, when operators struggled to adapt terrestrial extraction methods for life at sea; days when the industry moved fast and broke things, and people, too. Dynamite was used to trigger the explosions necessary for determining if new reserves lay beneath the waves, a practice that led to anything from headaches among crew members who breathed in the fumes from the resulting ignition to fiery accidents that killed and maimed dozens of men at a time. Incidents involving helicopters were commonplace too, less from pilot error and more from using a combination of swing ropes, cargo baskets and ladders to transfer crew from shore to rig.

By 1965, the accident rate in offshore oil had become so bad that Lloyds of London hiked its insurance fees for the sector. It was a very public signal that operators needed to adopt a set of industry-wide safety standards, not only for the handling of equipment, but also the daily engineering practices and build quality of offshore structures themselves. Fast forward to the present, and these aspirations are now almost fully realised. ExxonMobil, for example, now spends an average of $100m on training each year, while 2019 saw staff and partners at Shell embark on a monumental 373,000 training days – or roughly 4.5 per employee.

One new technology could tighten safety practices even further. With virtual reality (VR) technologies already entrenched from Houston to Malaysia, staff can now perfect their skills before ever setting foot on an offshore rig. And with everything from augmented reality to gamification marching over the horizon, there’s every reason to think that the future is digital, and far safer than anyone who watched operations on those first offshore rigs could ever have imagined.

It almost goes without saying that training has always been vital to survival on offshore rigs. Apart from understanding the practical basics of life as an oilman – machinery types or power systems – students are expected to become medics, too. Between CPR, first aid and marine survival, there’s plenty to cover. A course at the American Petroleum Institute (API) takes about 150 hours of serious study – and that’s before they join an energy company with its own specialised training. Browse the websites of industry heavyweights and one will be swamped by a storm tide of literature.

BP, for example, promises “a comprehensive approach to training its workers, combining rigorous standards, world-class instruction and sophisticated tools”. ConocoPhillips, meanwhile, aims to “attract, develop and retain employees through a combination of on-the-job learning, formal training and regular feedback and mentoring”, boasting over a dozen ‘talent development teams’ to guide employees through useful courses. Until about a decade ago, explains Kyle Daughtry, an XR solution architect at ExxonMobil, all this training was taught through a mixture of software and practical demonstrations. “Traditional methods include PowerPoint presentations, computer-based training and in-person training,” says Daughtry.

Over the past decade, though, energy companies have begun hunting for alternatives to ink-and-paper training books – something Jeff Potts, a cyber physical systems team leader at Baker Hughes, puts down to “the experiential aspect” of training. “Being able to read about how to do a job in a manual, and seeing images, is one thing,” says Potts. “I think being able to actually simulate doing that job, using experiential technology, helps immensely in retention.” Daughtry agrees, noting that VR systems are particularly good because they engage the user’s kinetic, visual and auditory senses – as well as encourage muscle memory.

It’s unsurprising, then, that big energy companies are so eager to invest in these experiential technologies, with VR training systems gaining traction across the industry. From 2015, BP began training offshore staff with VR, educating them on everything from ‘cyberdrilling’ to how to cope with emergencies. Meanwhile, one project at Shell made a digital copy of a rig off the coast of Malaysia, letting the crew explore the decks in VR. Though the exact statistics are scarce, one report by ABI Research suggests that by 2022, VR wizardry in the energy industry will grow to $18bn.

Apart from sharpening training, this frantic investment can be understood from a financial perspective too. According to work by McKinsey, organisations in the oil and gas sector could reduce capital expenditures by up to 20% if they adopt digital technologies – a claim supported by Potts. Because staff no longer have to fly out to physical sites to get hands-on training, he explains, companies can save vast amounts of money by using VR. “Once that adoption really accelerates,” he argues, “I think it will be a major cost and efficiency benefit as well.”

If you’d asked an offshore worker about VR just ten years ago, they’d probably have laughed – the technology was just so basic. Resolutions were high, but the lag between detecting movement and the image changing often led to acute ‘cybersickness’, with even enthusiastic gamers swearing off the platform and its unwieldy headsets.

Since then, of course, VR has galloped into the mainstream. But it is still far from perfect. After all, cumbersome headsets are still around, as is a lack of immersion. As Potts explains, though VR does a good job at conjuring an alternate reality, it’s utterly removed from the space the user is actually in. It hardly helps, he adds, that because users are strapped into pairs of personal goggles, collaborative training is basically impossible.

Yet the situation is far from hopeless, with several companies moving from VR to what’s known as ‘augmented reality’, or AR. Baker Hughes is at the forefront of these advances. Rather than enveloping users in a completely fake universe, its ‘Phantom View’ platform blends digital features with the real world instead. In the same way that Pokémon Go plops Pikachu and his friends on the street in front of the user, Phantom View can conjure valves, pipes and other machinery into the actual environment. Even better, continues Potts, Phantom View works everywhere from Microsoft HoloLenses to iPhones, making it perfect for collaborative training.

No wonder other companies are getting in on the act too – in the training realm and beyond. By exploiting AR helmets and other digital cleverness, for instance, Saudi Aramco has recorded a 70% increase in safety compliance, as well as a 10% improvement in workforce productivity. Companies from BP to Chevron are going down a similar path, enticed by AR’s ability to offer digital documentation and step-by-step instructions to staff remotely, either on dry land or miles offshore. At ExxonMobil, meanwhile, Daughtry and his team are using the technology to educate staff about a number of “low-probability, high-consequence tasks” that are hard to simulate using books and PowerPoints. That includes how to change out a hose or operate an offshore loading berth – both possible without actually having to go offshore.

Of course, any major technological shift comes with challenges – and the move to AR is no different. From managerial resistance to cybersecurity fears, a world where offshore staff are decked out with augmented technology is far from certain. But speaking to clients in the field, Potts argues that, as younger professionals join the industry, the chorus of voices demanding AR and other digital technologies will only grow. “It’s becoming more of an expectation,” he says. “I think what you’ll see over time is that as the generational shift happens, there’ll be more and more of an expectation of having these immersive technology solutions.”

Estimated investment in virtual reality in the energy industry by 2022.

More than a game

If Potts and Daughtry are right, and AR really is the coming force in offshore training, where might the industry go next? As in many other industries, one popular watchword is ‘gamification’. By turning training into a game, energy companies could make the whole process fun and get offshore staff ready if the worst happens. By putting staff in a specific scenario, then giving them options on how to react, AR allows crews to test their readiness and judgement on the fly. For example, they might be faced with a digital fire – or, if they’re worried about another Deepwater Horizon, a digital gas leak – and be expected to fix it. This clearly has uses for greenhorn staff, but experienced colleagues could soon be put through their paces too, with Daughtry noting that employees can be given new skills “at almost no extra cost”.

Obviously, even the best training on earth can’t entirely forestall the risk of accidents – recent spills from Russia to Canada suggest that even robust procedures cannot prevent every disaster. Still, it seems clear that as crews begin life offshore, AR will be their close companion. 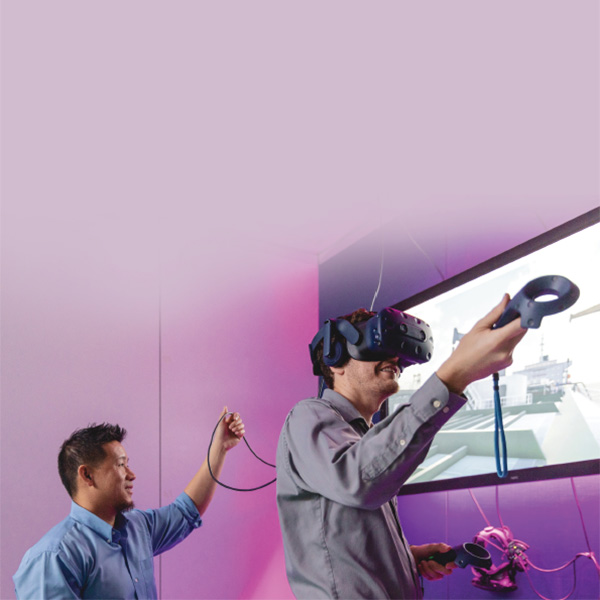 Kyle Daughtry and colleague using a VR headset at ExxonMobil. 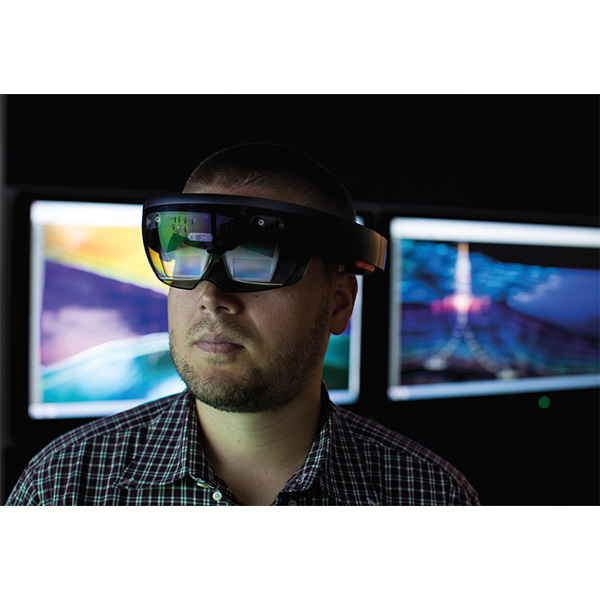 A Baker Hughes employee using one of its AR goggles. 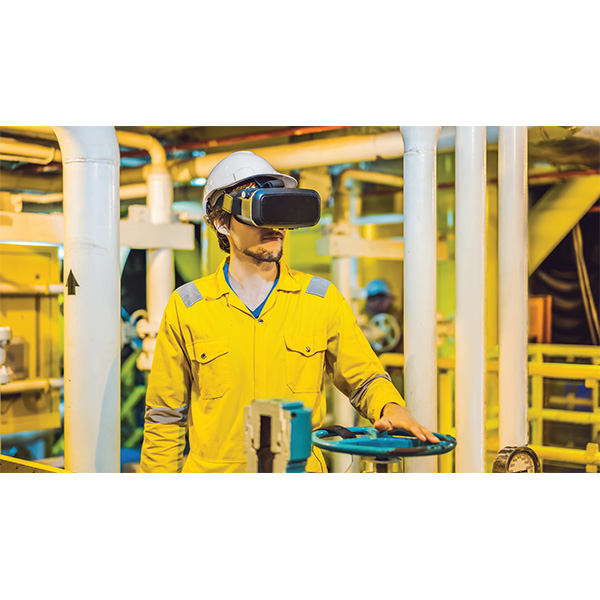 Using a combination of AR and VR, gas and oil companies can give their employees hands-on experience without having to visit the physical sites.
Post to: