Since the beginning of the Covid-19 pandemic, hundreds of people around the world have been evacuated from offshore oil rigs with suspected cases of the virus. Adequate testing can play a significant role in preventing transmission, but, so far, it has been difficult to secure. Irenie Forshaw talks to HSE director at Oil and Gas UK (OGUK) Trevor Stapleton, RMT regional organiser Jake Molloy and MSP Liam Kerr about the current testing regime in the North Sea and further steps that could be taken to protect the offshore workforce.

Working on an oil rig in the North Sea is not for the faint-hearted. The swaying steel structure is battered by waves during violent storms, cranes carrying heavy equipment lurch overhead and highly combustible materials must be carefully monitored at all times to avoid explosions. If all that isn’t enough, the commute to work is by helicopter.

For offshore workers, the promise of home is essential. Cramped living quarters and gruelling three-week on, three-week off work rotas are endured with the knowledge that much-anticipated field breaks will be spent with family and friends. So, when the outbreak of the coronavirus pandemic threatened to leave offshore workers stranded at sea battling a novel infectious disease, testing quickly rose to the top of the health and safety agenda.

From bad to worse

The oil and gas industry hasn’t had an easy ride lately. Reeling from the Saudi Arabia-Russia oil price war and US-China trade spat, throw Covid-19 into the mix and, as HSE director of Oil and Gas UK (OGUK) Trevor Stapleton says, “it doesn’t take a genius to guess what will happen”. As the world began to lock down, the number of wells being drilled dried up. Operators have become increasingly reluctant to make large-scale investments, budgets have been slashed and cessation of production decisions are likely to be brought forward. Stapleton is keen to stress this should be understood as part of the bigger global picture. “I think it would probably be wrong to say that all this is a Covid decision,” he explains. “Probably what Covid-19 has done is accelerate the thinking.”

Jake Molloy, RMT union organiser for the northeast of Scotland, has witnessed the devastating impact the pandemic has had on offshore workers in the North Sea. “We’ve seen over 7,500 redundancies in the space of four months,” he says. “That number goes up every single day and OGUK are already estimating that we could lose somewhere in the region of 30,000 [people] by autumn [2021], if we don’t get a solution in the form of some kind of vaccination. It’s pretty grim.”

Molloy likens the conditions on an offshore installation – confined spaces, shared cabins and recycled ventilation – to that of a cruise ship. Prevention, he says, is absolutely critical. On top of reducing the number of workers offshore, operators have faced the difficult task of enforcing social distancing measures as well. Where possible, single cabin occupancy has been encouraged and rotas have been put in place to limit contact in leisure facilities.

Another major challenge has been working out how to safely return offshore workers home on schedule and repatriate those with suspected Covid-19. “We were within days of losing all the helicopters, mainly because the pilots were saying ‘we’re not going to fly because we don’t think you can guarantee our safety’,” recalls Stapleton. “The only way you can get offshore is through helicopters, so, if you lose them, offshore basically shuts down.”

OGUK’s pandemic steering group worked with helicopter operators to coordinate an industry-wide response. Snood face-coverings, heavy-duty curtains and a paramedic crew on board aircraft were among some of the measures put in place. Meanwhile, helicopter trips to and from the rigs have been divided into four types: Category A flights for personnel uninfected by the virus; Category B for those who remain healthy but have worked alongside the infected; Category C for those with suspected cases; and Category D for workers with life-threatening symptoms. As a result, helicopter operations have been maintained throughout the pandemic.

Jobs OGUK has predicted could be lost in the North Sea.

As the UK government struggled to scale up coronavirus testing not only for the population at large, but for NHS and care staff as well, operators had their own concerns over providing adequate testing for offshore workers. In April, BP came under fire for flying workers to the ETAP North Sea installation without waiting for test results. On this point, Stapleton is defensive of the oil giant. “That was really unfair,” he says. “They were just starting out and had got all of these barriers in place. In that first week they made one mistake and then they corrected it.”

“It’s been a very steep learning curve,” adds Molloy. “At certain points in the early stages we were seeing upwards of 60 flights a week, bringing suspected or actual cases to shore but, to the credit of the industry, they’ve grappled with it and now they’ve got that number down to virtually zero.”

Although testing is currently available at NHS test centres for anyone with symptoms, operators still have to foot the bill for blanket testing in private labs for their offshore employees. Putting an asymptomatic testing regime in place comes at a significant price. “You’re looking at something like £250 a head for every single test,” explains Molloy. “Some of the smaller and medium enterprise companies simply cannot accommodate that kind of cost.” On top of this, employees need to be accommodated in a hotel while they await test results. Operators unable to afford this must rely on flimsier procedures like temperature checks to protect their workforce.

The union organiser has been calling on the government to allow offshore workers to undertake asymptomatic testing at government sites prior to going offshore. This would, he says, reduce costs and the risk of taking the virus offshore, while building confidence in the workforce. Molloy is frustrated that the government has not, so far, taken heed of his advice –galling since, he says, “these guys are performing a significant role: they’re keeping the lights on”.

“The only way you can get offshore is through helicopters, so, if you lose them, offshore basically shuts down.”

While Stapleton agrees blanket testing is a key barrier that can help lower the risk, he cautions that it should not be regarded as the panacea for stopping the spread of the virus. In early 2020, the UK government highlighted concerns over capacity and the need to give priority to NHS and front-line workers. Stapleton is eager to address this issue. “We’ve always said we would never want to overload capacity,” he says. “But we would love to get access to the Aberdeen airport NHS test centre. I’ve had colleagues who have actually gone there for an appointment. There’s a lot of bored-looking helpers. One of my team members was there for a test and saw one other car in half an hour.”

Stapleton knows two operators who would like the opportunity to carry out a proof of concept test at the Aberdeen testing facility. Like Molloy, he is discouraged by the response he has had from the government. “I’ve made that request dozens of times, but [I] always meet a complete brick wall,” he sighs. “And that’s just for proof of concept, using a couple of operators to see how things went. If we overloaded the system, we’d stop. But just give us the opportunity, that’s all we’re asking for.”

One politician who is only too familiar with these concerns is North East MSP Liam Kerr. The Scottish Conservative has worked in Aberdeen for nearly two decades and has been contacted by multiple offshore workers in his constituency over concerns about adequate testing. In May, Kerr issued a plea for more coronavirus tests for offshore workers. Since then, he has been disappointed with the progress and is calling on the Scottish government to do more to support the sector. “Workers right across the industry are calling for blanket testing and Nicola Sturgeon should be acting on this rather than ignoring these calls,” he says. “The fact that companies have had to go to the extent of funding their own tests for their staff highlights the lack of help they have received. Now is the time for the SNP to recognise the vital contribution this industry makes in keeping the United Kingdom running.”

As winter looms and the prospect of battling against Covid-19 with the added pressure of seasonal flu becomes a reality, for Stapleton, adequate testing will be crucial. While additional measures can be put in place by operators who are unable to carry out testing, ultimately, he says, “we want as many barriers as possible”. According to Stapleton, gaining access to NHS test centres around the UK would also give offshore workers greater flexibility and safeguard their three-week field break, as it would no longer be necessary to stay in hotels awaiting test results. “To me, that seems to be a far more efficient way of doing things than what we’re currently trying to do, which is filling a gap that neither the Scottish or UK government at this moment in time are prepared to fill,” he says.

For Stapleton, asymptomatic testing is a precaution that can be taken “before the horse has bolted”. However, he believes a two-pronged attack is necessary to catch the people that fall through the cracks. Once offshore, he says, having the ability to take swab samples, return them to the beach – the term by which oil insiders refer to onshore – and use NHS labs to get them tested and turned around within a day, would act as an additional preventative measure.

Offshore workers that were found to have the virus could then be brought back to self-isolate, helping to limit transmission on installations. While there is currently no testing taking place offshore, it is a hot topic of discussion among operators. By covering these two bases – offshore and onshore – Stapleton concedes that there is little else that can be done with regard to testing, unless antibody tests are made widely available. Still, it will be difficult to put these measures in place without help from the government. “I think in terms of what we can do,” he says, “is to continue banging the drum about testing.” 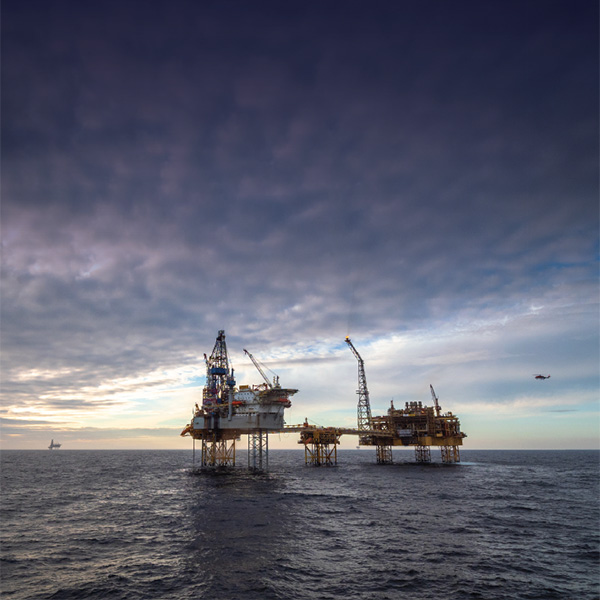 An oil rig in the North Sea. 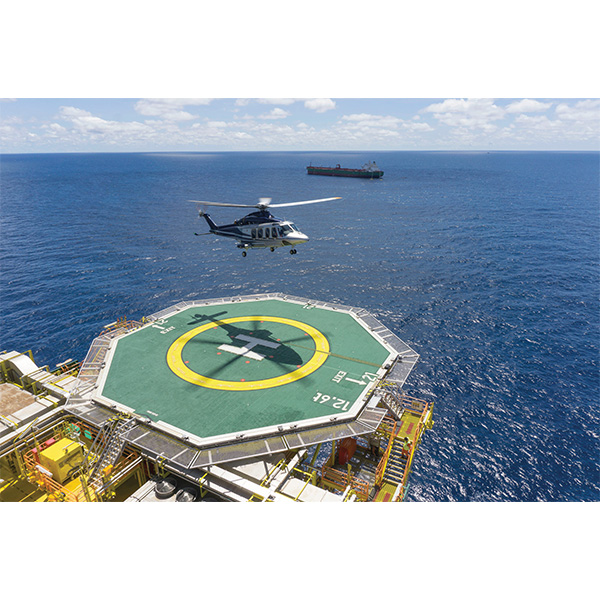