A gulf in technology

Although conventional seismic technologies have been around for decades, they still suffer from a number of drawbacks, especially when it comes to giving scientists a precise idea of underwater geology. Andrea Valentino talks to Dr Marcos Gallotti Guimarães, a geophysicist and expert in offshore energy, about how the industry is coping and how new ocean bottom node technology might be the way forward.

Offshore drilling was once quaintly unsophisticated. The earliest prototypes, from the 1890s, were simply regular landlocked rigs, stretched out to sea on wooden piers. Even by the 1950s, oil companies would often just hang rigs over the edge of old barges. The engineers could only drill with the understanding that if they hit oil or gas, they would have to stop, plug the hole with cement, and come back later. Even then, the work was far from easy. The vessels were often buffeted by waves, meaning prospectors had to hold on with one hand and operate the rig with the other.

From there, of course, offshore drilling has dashed to become one of the most sophisticated industries on earth, and is expected to reach a stonking $89.8 billion by 2020. Difficulties remain, especially when it comes to exploring in geologically complex areas, but neither is the situation completely hopeless. By leaving surfacebased techniques behind, and investing in so-called ocean bottom machines, prospectors are able to investigate even the most inaccessible underwater geologies. All this has the potential to revolutionise subsea exploration, and even save time to boot.

Stub out the tow streamer

Climb any mountain range, or explore any cave, and the childish urge is always there to raise your voice and hear it echo back to you, the sound waves jumping from the rock to your ears and back again, until the noise finally fades. This humble pleasure is not so different from the methods used in a far more serious endeavour – offshore oil exploration.

Since the 1970s, energy companies have relied on conventional seismic acquisition. First, engineers shoot airguns into the sea over an offshore site. The resulting seismic waves race down to the seabed, before bouncing back up to hydrophones, hung like fairy lights from the back of a ship (which is why conventional seismic acquisition is often known as ‘tow streaming’). By measuring the speed and direction of the echo, geophysicists can build a map of the geology under the seabed, helping them pinpoint exactly where they need to drill.

The simplicity of this approach might explain the robust trade in tow streamers, even decades after their invention. But for all that, tow streamers are far from perfect. The problems begin with the seismic waves themselves. Because perpendicular secondary waves (S-waves) cannot transmit through water, tow streamers instead rely on longitudinal primary waves (P-waves). But P-waves can be distorted, especially by underground gas reservoirs, which risk giving scientists false impressions of the undersea geology.

“Because the ships tow a cable about 10m under the water, the signal is affected by splashing waves, which generate noise. This noise can affect the resolution of images.”

Other challenges are similarly linked to working offshore. “Because the ships tow a cable about 10m under the water, the signal is affected by splashing waves, which generate noise,” explains Dr Marcos Gallotti Guimarães, a geophysicist and expert in marine oil exploration. “This noise can affect the resolution of images.” Objects in the water, such as pipelines or oil rigs, can also disrupt tow-streamed signals. Nor are the consequences of bad data purely hypothetical – imprecise drilling can cost companies upwards of $100 million a pop.

$89.8 billion
The estimated value of the global offshore drilling market by 2020.
Research and Markets

That mattered less in previous decades, when exploration was booming and companies could still strike it rich using imprecise technology. But as reservoirs have shrunk and prospectors have been forced to dig in more geologically muddled areas, tow streamers have started showing their age. As Guimarães succinctly puts it, “now that the reservoirs are more complex, we need higher resolutions, which tow streamers cannot provide”.

Salt in the earth

About 170 million years ago, when Africa and the Americas had yet to drift apart, and the Atlantic was still young, the Gulf of Mexico was little more than a salty lagoon. The water was shallow enough to evaporate, leaving behind a thick layer of salt. As millennia passed, material from the Rockies and Appalachians flowed into the bay. Yet the salt kept shifting below the seabed, eventually forming into bulbous domes, sometimes thousands of feet high. Because of their curved tops – imagine a cross between a mushroom and flowerpot – there is plenty of space for oil and gas to snuggle underneath. By one estimate, the Gulf of Mexico’s original reserves total around 22 billion barrels of oil, as well as 193 trillion cubic feet of gas.

Bountiful salt domes can be found from Angola to the coast of Brazil, and go a long way towards explaining why the energy industry has begun investing in alternatives to tow streamers. After all, because they sit near the water surface, they cannot penetrate under the salt crust. Being forced to use P-waves hardly helps. And those hanging rows of hydrophones can only snake back for so long, meaning geological readings are sometimes too weak. As one BHP executive vividly described it, using surface tow streamers among the salt pillars of the Gulf is like trying to look down at the earth from 30,000 feet – on a wet, cloudy day.

An alternative is sending imaging machines into the depths, a technique known as ocean bottom exploration. One option uses cables, placed directly on the seabed. But as Guimarães explains, this technology suffers from handicaps all its own, especially when it comes to getting good readings at depth. “The cables are generally able to go to a depth of 1,000m. But for most of the oilfields on earth, engineers will want to go deeper than that.” Many companies commonly drill below 1,500m, and one prospect off the Gulf of Mexico is twice that. Just like tow streamers, meanwhile, ocean bottom cables struggle with obstacles. “Even if you force them to go deeper, you have to physically lay the cables down,” Guimarães says. “So if you have infrastructure – risers, cables – it is much more difficult to deploy cables.”

Far better, Guimarães suggests, are ocean bottom nodes (OBNs). Like their cabled cousins, they sit on the ocean floor, but are individual units, meaning they can be placed between obstacles. Their size (each weighs about 30kg) mean that OBNs can be scattered liberally across the seafloor, cutting interference and giving scientists a far more detailed view of the underlying geology. It helps, too, that OBNs can abandon P-waves and instead fire reliable S-waves straight into the ground. Longevity is another draw. The machines can perch on the ocean floor and gather data for weeks at a time, and when a survey is done, they can be collected and reused.

No wonder Guimarães calls OBNs the technology that “everyone” wants to use, a view clearly shared by some of the big E&P companies. CGG, a French geoscience company, recently announced a major ‘multi-client’ OBN survey in the Gulf of Mexico, while Seabed Solutions is using nodes to investigate a 270km2 plot nearby. All this is reflected by remarkable growth. The market for OBNs has reached $1 billion, and Guimarães believes it’ll soon overtake conventional seismic acquisition.

The cost of progress

Yet for all this enthusiasm, Guimarães is careful to emphasise that OBNs did not jump to success overnight. A long-standing problem has been high costs. This is especially true in developing countries, as Guimarães remembers regarding his old job as an engineer at Petrobras, a post he held for over 20 years. “In Brazil, the bosses accepted everything, but then when they saw the price, they would complain.” But as the market has worked its magic, and companies from BP to Chevron have built their own stockpiles of nodes, the technology is becoming much cheaper; in some cases, using nodes to map 1km2 of seabed now costs around 45% less than it did five years ago.

More to the point, Guimarães continues, companies are increasingly willing to pay extra for better measurements, especially as salt domes and other geological boondocks grow in importance. “Geophysicists at Shell or BP will tell you that though acquiring data with towed streamers is cheaper, they’re not able to get sufficient resolutions, unlike for ocean bottom nodes.” Certainly, energy companies are constantly working to refine OBNs, improving battery life and increasing the gap between which nodes need to be placed to get accurate readings.

22 billion
The number of barrels of oil in the Gulf of Mexico’s original reserves, along with 193 trillion cubic feet of gas.
US Department of the Interior, Bureau of Ocean Energy Management

For his part, Guimarães is working with Bluware, a Houston-based seismic data company, to sharpen information-processing times. Because OBNs are already on the seafloor, the echoes their hydrophones capture do not need to be bounced back up to a waiting ship. But it can still take time to recover the devices and study the data. To speed up the process, Guimarães and his colleagues are experimenting with uploading information directly to the cloud. “This means you could access the survey from the beach or the office,” he says, even as the nodes themselves lie amid the fish. If only the oil pioneers on their rickety barges could come back and see that.

An oil rig in the process of being towed out to the Gulf of Mexico. 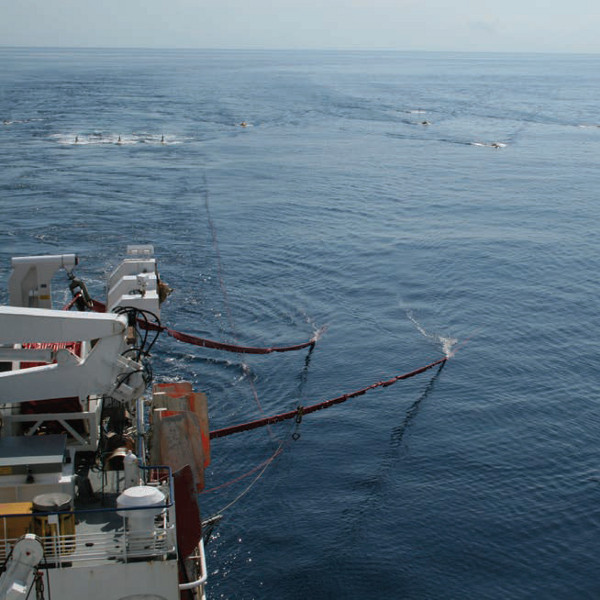 Seismic cables being deployed: generally only able to reach a depth of 1,000m, cables struggle to reach most oilfields, which are located below 1,500m.
Post to: