As the drilling environment becomes more challenging, there is a greater need for real-time downhole information. With National Oilwell Varco's IntelliServ2 network due to be released in 2014, David Pixton, senior fellow at NOV IntelliServ, explains why the latest improvements in wired drill pipe systems are critical to the industry.

The drilling environment is becoming more challenging as we seek to produce resources from deeper and more complex reservoirs while being subject to increasing cost and regulatory pressures. The ability to make fast and effective decisions while drilling has increased the need for real-time, high-definition downhole information.

Wired drill pipe (WDP) helps to improve decision-making by providing drilling teams with downhole information at speeds of up to 57,600bps, many magnitudes faster than conventional telemetry systems. This gives vastly improved real-time visibility of the drilling process, borehole and formation data, which improves the team's ability to respond to unexpected challenges or fine-tune performance.

Tangible benefits have been realised as WDP technology has been deployed worldwide in both offshore and land wells. For example:

WDP technology has taken significant strides over the last ten years, with more than 110 wells drilled using this high-value technology. It has been applied in well depths of up to 21,000ft, at temperatures of up to 150°C, and in a variety of fluid environments. This global experience has been used in the development of a second-generation WDP system known as the IntelliServ2 network, due to be released in 2014. System improvements focus on four basic elements of the WDP system: the inductive coil that electrically connects neighbouring tubulars together; the data cable that carries data through each tubular; the network electronics that control the flow of data through the system; and the tools used at surface to control and monitor system performance.

One key lesson learned from extensive use of WDP is that drilling environments are getting tougher. Torque requirements for many of these environments are rising as a result of increases in well complexity and the frequency of unexpected downhole high-torque events.

Two improvements have been made in the second-generation system to accommodate these conditions. First, to provide for higher-torque WDP options, a wired version of NOV Grant Prideco's TurboTorque connection has been designed, which increases the torsional capacity of the threaded connections by at least 20% over any high-torque connections that have been wired in the past. Second, recognising that some high-torque events may still exceed the capacity of even the best connections, inductive coils have been redesigned to be more tolerant of such damage. This enables them to continue working, even in the face of damage to the tool joints in which they are embedded.

Substantial effort has also gone into reducing the effects of impact damage on inductive coils. IntelliServ2 uses tougher materials in the coil and is optimised to allow for recessing the pin-end coil in order to reduce the risk of handling damage. Coil life will substantially increase with a tougher coil. At the same time, the coil design is simplified to provide for reusability and reduce manufacturing effort and cost. These reductions, combined with a longer useful life owing to improved coil robustness, will reduce the total cost of ownership of the system.

The data cable has proved to be robust in most drilling environments. However, in some specific corrosive environments, cable damage has been seen, so the IntelliServ2 cable has been armoured with a more corrosion-resistant alloy, which expands the environmental envelope of WDP. Furthermore, to address the growing interest in alkali-metal formates for drill-in and completion fluids, seal materials that are compatible with these fluids have been qualified and are offered as an optional configuration for WDP.

Many of the challenges that were encountered during the initial commercial use of WDP technology were related to damage sustained by electronic modules, known as data links, in aggressive drilling environments. Over the course of several years, substantial design and testing resources have been applied to identify and address each weakness in electronic design. One key improvement is in the way downhole batteries are monitored and managed; this will extend battery life, with less power wasted. Industry leaders in downhole circuitry have also guided improvements in design and manufacturing methods towards substantially reducing vulnerability to vibration and thermal damage. These improvements have been qualified for commercial introduction as part of the IntelliServ2 network through intense testing in laboratories and field trials.

Not only is the network circuitry more robust, but the software and firmware that controls the network also include enhancements that simplify operation and improve real-time understanding of network health status. A new graphical user interface has been implemented that makes operation more intuitive and assist in the quicker resolution of any network-related problems.

An extensive assortment of conventional MWD and LWD tools can be connected to a WDP network. In addition, new types of sensor packages can be positioned at various points of interest along the entire length of the drill string (not just in the bottom-hole assembly). This 'along-string' measurement space represents a new opportunity for industry partners to develop tools. Measurements taken along the drill string can provide particular insight into things like dynamic pressure and temperature conditions, which have previously been unmeasurable.

Early along-string tools have been used to assess the effectiveness of hole-cleaning efforts, detect the location of an incipient pack-off, and continuously monitor the equivalent circulating density at critical points in the well. Next-generation along-string measurement tools, to be released in 2014 by one NOV IntelliServ partner, offer improved pressure accuracy and expand the list of measurement types to include lateral, axial and torsional vibration, along with rotational speed.

Developments in along-string tools have been accelerated by a shift in the business model governing the WDP service. This shift enables WDP to be supplied through conventional and existing supply channels. In particular, speciality sensor-tool development will now be performed by service companies and tool manufacturers that excel in this field. To support this process, NOV IntelliServ has built a team of engineers to assist partners in the development and integration of new along-string measurement tools. This team provides technical guidance to partners in the design, testing and operational aspects of network-enabled equipment.

Many years ago, mud pulse technology allowed the industry to take a large step forward by providing critical information while drilling. WDP technology now represents the natural next step towards better understanding and control of the drilling process. Through the combined efforts of operators, service companies and the telemetry system provider, WDP continues to become more useful to the drilling community, helping improve understanding and control of the well-construction process, and enabling the industry to meet the challenges ahead. 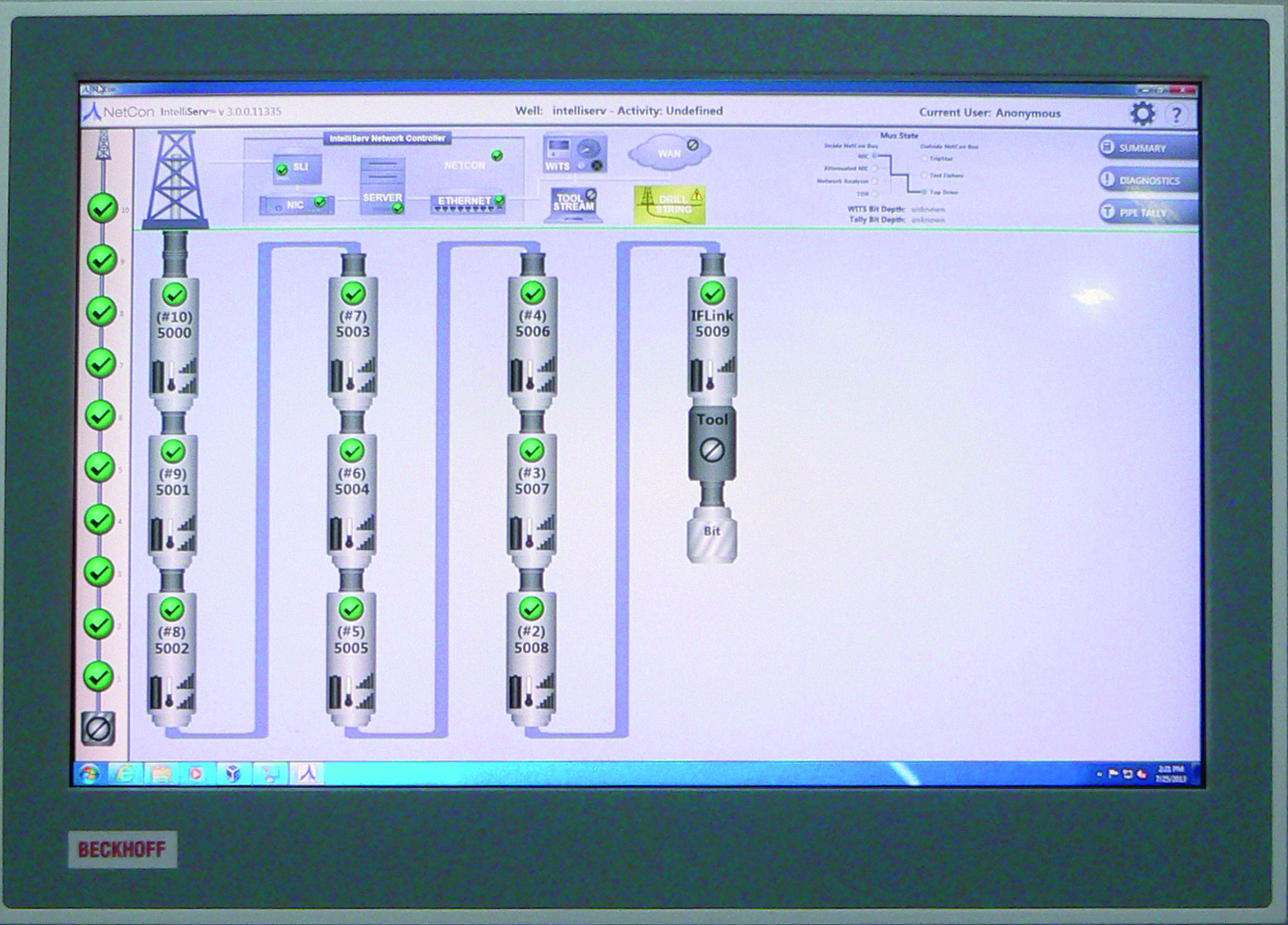 The graphical user interface makes usage more intuitive and assists in the quicker resolution of any network-related problems. 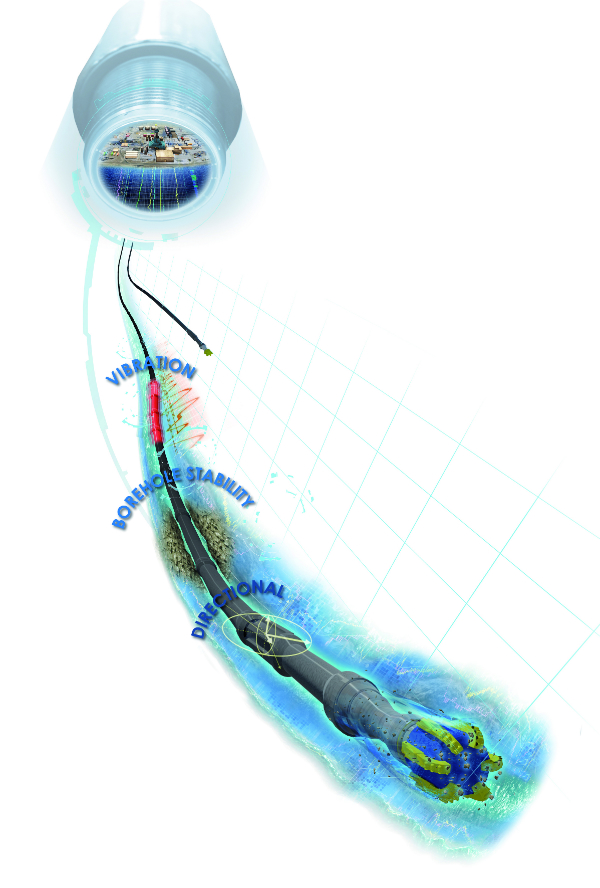 Sensors and measurements can be positioned at various points of interest along the entire length of the drill string.