Some of the tasks for an offshore worker can be dirty or dangerous. Recent advances in robotics, however, could mean the removal of human beings from some of the riskiest situations encountered on the rig. Michael Shaw talks to Anders Røyrøy, a researcher in robotics at Equinor, about the capabilities of units currently being deployed by the energy company.

The Arctic lamprey has a vast range but prefers to spend most of its time clinging to the shallow freshwater lakes and rivers of the high north. Having spawned in the gravel of riffles, these eels are accustomed to eating detritus in the mud of slow-flowing channels or fixing their small jaws onto the sides of salmon, whitefish or trout. Reaching up to 32cm in length, they are prey for pike, gulls and humans, who rear the Arctic lamprey in special farms for commercial sale as bait.

The Eelume is found in much deeper waters and is considerably more difficult to eat. Developed as a spin-off from the Norwegian University of Science and Technology (NTNU) in collaboration with Kongsberg Maritime and Equinor, the aquatic robot bears more than a passing resemblance to its natural forbear. Like the Arctic lamprey, the Eelume spends almost all of its life submerged and moves through the water by flexing its entire body, visual sensors to tail, allowing it to move with greater efficiency while inspecting underwater infrastructure for oil and gas companies.

110 million
The number of barrels of oil equivalent that Oseberg H is expected to produce.
Equinor

The unit is the latest example of a new generation of robots making life easier for energy companies by removing their human workforce from some of the riskiest, not to mention physically awkward, jobs in the oil and gas sector. Offshore hydrocarbon extraction has, after all, still too many accidents. In supplementing their human workforce with robotic assistants, energy companies can not only exploit the opportunity to transfer the former to more productive tasks, but also indirectly increase the lifespan of infrastructure and prolong the life of installations that would otherwise have been dismantled for being uneconomic.

“We work in confined spaces – where we have by-products from the production, and we don’t want to expose ourselves to them.”

As one of Equinor’s leading robotics researchers, Anders Røyrøy appreciates these conditions more than most. Based at the energy company’s facility at Bergen in Norway, Røyrøy has dedicated much of his career investigating the potential for robots to undertake those jobs that he describes as “dangerous, dirty, distant or dull”.

“That’s the main driver for robotics,” he adds. “We don’t want to work where we have certain chemicals or toxic gases. And we add distance. We try to do more work remotely, rather than having to send people offshore, meaning that we also have less of an environmental footprint.”

The history of robotics in the oil and gas sector stretches back to the late 1950s, when the Hughes Aircraft Company debuted the Manipulator Operated Robot (MOBOT). Resembling the product of an unfortunate union between the Michelin Man and an octopus, the machine was intended for use in radioactive environments and controlled from a safe vantage point with the aid of a 200ft cable.

Although designed for the nuclear power industry, it was in the oil and gas sector where the MOBOT proved most influential. In 1960, the Shell Oil Company began adapting the machine to carry out ‘operations underwater at an assembly position at the top of a well’. If successfully deployed, the machine would eliminate the need to send divers down to do the same work at often dangerous depths. In practice, that wasn’t always the case. Weighing just over 3t, the MOBOT would sometimes get lodged at the top of subsea wells and had to be rescued by divers.

Not all robots in the oil and gas sector were deployed below the surface. As extraction activities began to move into harsher environments and, unsurprisingly, had a knock-on effect on cost margins, so the demand for automated solutions increased. Inspection duties were one such area where the duties were considered sufficiently mundane and treacherous to allow for machines to take over.

Much of Røyrøy’s research lies in this vein. “We work in confined spaces – where we have by-products from the production, and we don’t want to expose ourselves to them,” he explains.

The researcher’s work at Equinor began in 2006, when he was employed to make general purpose industrial robots capable of performing specialised maintenance activities on platforms and other surface oil and gas infrastructure. “The manufacturers sold this particular unit in high numbers,” says Røyrøy. “The oil and gas industry was not deploying them on the same scale or for the same purposes. So, we had to go from those industrial robots to more niche models.”

The Taurob Tracker is a good example of the specialised robots Equinor is currently testing for its oil and gas facilities. Resembling a giant disembodied Meccano arm supported by the miniaturised bottom half of a tank, the robot is equipped with an intuitive control system easily installed on a tablet or joystick interface. It is designed to perform tasks that include the reading of dials, valve positions and level gauges, monitoring concentrations of harmful gases, and moving up and down stairs.

Crucially, it also functions as a first-responder unit in explosive atmospheric conditions. Safety is, after all, the watchword for robotic engineers like Røyrøy. Surrounded by tons of heavy drilling equipment and reams of pipes rapidly siphoning hydrocarbons back to the coast, there are plenty of unpleasant consequences for platform engineers if something goes wrong. And while companies like Equinor are consistently doing all they can to minimise the danger of corrosion and ruptures, any risk for human operators is reduced that bit more by using robots.

“By reducing those [dangers], we can make our operators safer and have a higher likelihood of getting everyone safely home from our assets,” says Røyrøy.

Even so, risk is not the only driver of research into robotics at Equinor. The HX Cleaning Robot is tasked with cleaning heat exchangers on platforms, which as Røyrøy explains, are “online all the time” and therefore difficult to maintain without some measure of downtime at the facility. By using a machine to perform this action, oil and gas companies can repair this key component remotely, preventing them from ever “having to clean or inspect it during its lifetime”.

Additionally, the unit uses high-pressure water hoses to do its job, an improvement on the environmentally unfriendly chlorine that was often used for cleaning purposes. “We have also been working on finding solutions for paint removal, and the painting and coating of assets,” explains Røyrøy.

Underwater inspection and maintenance robots are also growing in sophistication. In addition to the Eelume, Equinor employs its Empowered Remotely Operated Vehicle, or E-ROV, to inspect its underwater infrastructure. Battery-powered and operated using an Ethernet connection, the unit is supported by a dedicated subsea network and a network of charging stations, eliminating the need for a mother ship.

The unit is operated remotely by an engineer. This feature, however, might evolve in light of increased demand among oil and gas companies for autonomous underwater vehicles (AUVs.) Several companies have already released robots that, with some tweaking, could easily be applied to subsea pipeline inspection and similar duties. The Aquanaut by Houston Mechatronics is one such AUV, capable of covering up to 200km in a single mission and designed to transform into an ROV if the situation demands it.

While the field of autonomous swimming robots is still in its infancy, the recent construction of the Oseberg H platform hints at much grander ambitions to harness truly independent machines among oil and gas companies. Built as Equinor’s first – and only – fully automated platform, the facility contains no dormitories or indeed any sign whatsoever that human engineers are welcome. “With Oseberg H, we take a huge technological leap forward,” proclaimed Anders Opedal, Equinor’s executive vice-president for technology, projects and drilling, when the rig opened. It is expected to produce up to 110 million barrels of oil equivalent (boe).

The Oseberg H, however, is still run from another facility offshore. How far away are we, then, from a revolution in autonomous robotics across the sector? Røyrøy is not convinced the oil and gas industry is about to deploy such machines en masse any time soon. “The human in the loop will still be around for us for controlling drones, I’d say, for the next 10 years,” he says. Nevertheless, he remains optimistic that autonomous robots will eventually be able to shoulder some of the more onerous burdens encountered in the sector relatively soon.

“The human in the loop will still be around for us for controlling drones, I’d say, for the next 10 years.”
“At Equinor, we have a step-by-step approach to deployment,” says Røyrøy. “What we are testing today in the lab will be out there, being tested in the field, in three years. Using that approach, we will increase our functionality and the tasks that we can perform with our equipment. And the same approach will be used on autonomous and AI-driven robots.” 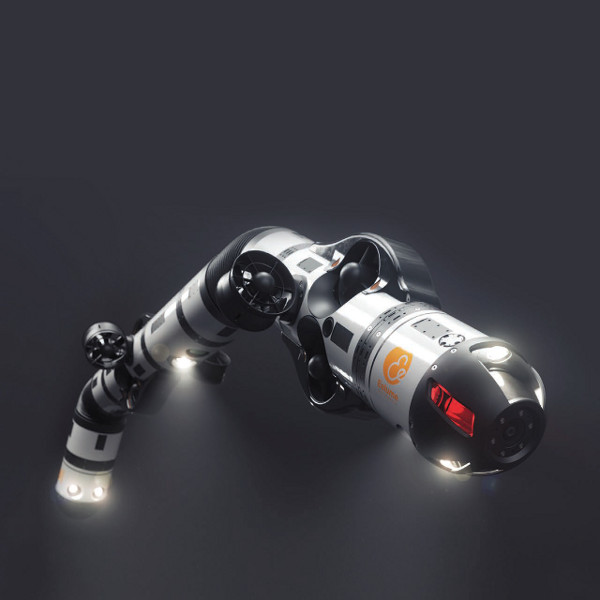 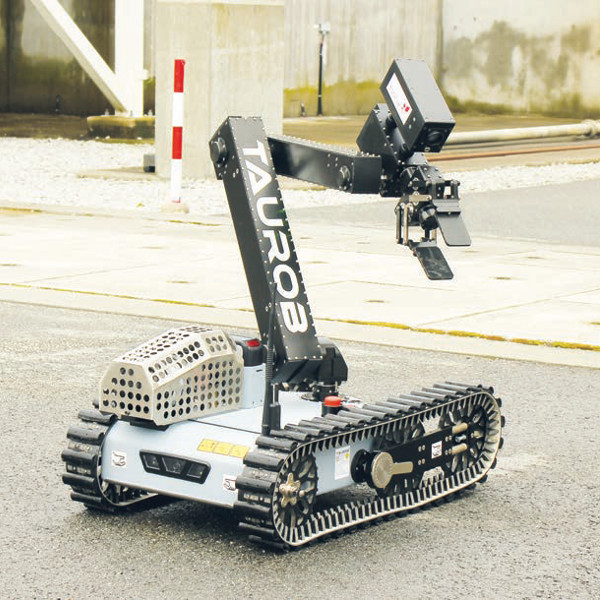 The Taurob Tracker is designed to perform tasks that include the reading of dials, monitoring levels of harmful gases, and moving up and down stairs.
Post to: